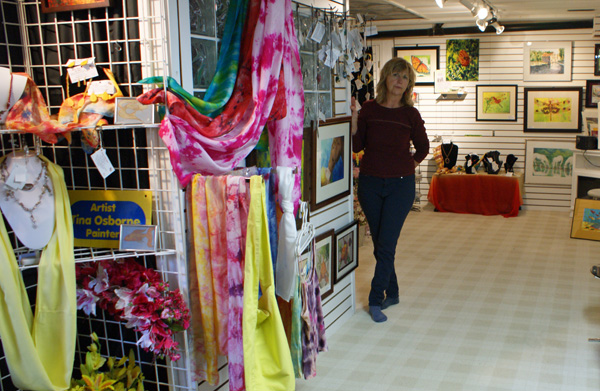 Tina, after 35 years of training, management and director experience with the Federal Public Service, continued her largely self-taught personal art experiences and augmented that with jewellery design, wearable art and music creation.

Tina has been strongly influenced by her two year naturalist experience as ‘Artist in the Park’ at Presqu’ile Provincial Park, where her Garden and botanical art were first expressed.  In addition to painting animals, and people, aquascapes and landscapes, many of her other works also express inner landscapes, and have recently in 2018 incorporated poured painting techniques into her creations.

Work has won awards at juried shows and have also been hung in the Expressions, Parrot Gallery (most recently 2018) and Belleville Art Association Juried Shows, all in Belleville; Art in the County, Picton and in the Impresario Gallery, Cobourg. She has also participated in Art in the Community in Belleville, Picton and Brighton as well as produced work for the Quinte Reclamation Project and various other causes and events.Tina also enjoys participating in the Picton Horticultural Shows (2014-2016) and will be a vendor at the Kingston 2018 Ontario Regional Horticultural Show.

-2013:Commissioned by the Sandbanks Summer Village in 2013 to produce six 6 foot by 4 foot panels of outdoor art depicting life at the Summer Village and continue to be displayed.

-2014 produced the theme music, and a painting for the “Unraveling Vincent” documentary by Brittany Olerenshaw, at Belleville’s Doc Fest.

-2017 The County magazine, Tina and her work were on the cover and were the feature article.She has also been featured and written for the Umbrella QAC newsletter and on the Belleville Intelligencer Gallery page.

Work is also available at the:

-The Presqu’ile Gallery and Gift Shop, Christmas at Presqu’ile (2009 to present);

Tina belongs to the Quinte, and Prince Edward County Art Councils and the Belleville Art Association, and is also a volunteer and sponsor for the Quinte United Immigrant Services and a previous member of the Quinte Arts Council Board of Directors.